You’ll have to wait until 2020, but the new $200m Israel National Library, located next to the Knesset building looks set be a stunning new landmark in the capital.

The building of the new Israel National Library is set to start. On Tuesday, April 5, 2016, a cornerstone laying ceremony — in the presence of the President of Israel Reuven (Ruby) Rivlin and Prime Minister Benjamin Netanyahu, will be held at the site of the new National Library of Israel (NLI) complex in Jerusalem. The building will open its doors to the public in 2020. Dignitaries and major NLI supporters from around the world, including the project’s foremost supporters, Lord Rothschild and the Gottesman Family will participate in the occasion.

Speaker of the Knesset MK Yuli Yoel Edelstein, Minister of Education MK Naftali Bennett, Minister of Jerusalem Affairs and Heritage MK Zeev Elkin and Chairman of the Jewish Agency for Israel Natan Sharansky will be in attendance.

The beginning of construction on the new building is a major milestone in the National Library’s transformative renewal process, which aims to preserve and open access to the cultural and intellectual treasures of the State of Israel and the Jewish people safeguarded in its collections. The partners in the renewal project are the Government of Israel, the Rothschild family under the auspices of Yad Hanadiv, and the David and Ruth Gottesman family of New York.

NLI, founded in 1892, is in the midst of a renewal process designed to address challenges and opportunities presented by the 21st century. The new building will enable NLI to provide state-of-the-art services to researchers, readers, visitors and online users, making accessible the millions of intellectual and cultural assets it has collected for more than 120 years.

Throughout the renewal process, NLI has expanded its collections, while investing significant resources to make them available online. As an integral part of its collection development policy, NLI has partnered with hundreds of institutions in Israel and across the world to provide access to cultural treasures, including many which are not among the National Library’s physical holdings. The new NLI building will address the needs of leading scholars, while also opening access to intellectual and cultural treasures for the general public. 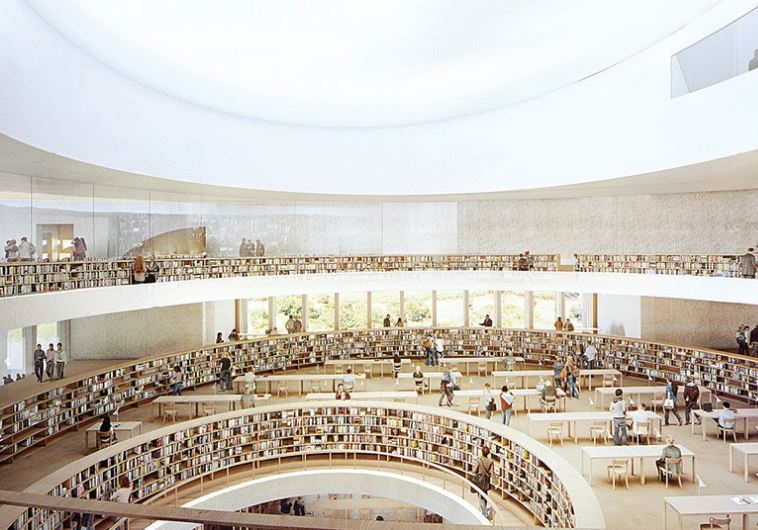 The NLI Education and Culture Division, is an integral component of the renewal process, and will continue its works to cultivate literacy and scholarship among youth, providing a variety of educational experiences based on the wealth of resources found in the NLI collections. Groups of students from across Israel, both Jews and Arabs, participate in programming at NLI on a daily basis. Thousands of visitors of all ages and backgrounds also come to NLI each year to enjoy a range of cultural events and performances, conferences, and lectures.

Lord Rothschild, whose family foundation is a major supporter of the NLI said of the project, “For 2,000 years the writings of the Jewish people were scattered across the world. Now these writings from the past as well as books yet to be written and digital materials, together with a wide range of collections, are to have a permanent home and one where it should be – in the heart of Jerusalem. We must be ready to serve the global virtual community, the Jewish community throughout the world, all those who make Israel their home, Jews but also Muslims, Christians, Druze, Bahais and indeed groups and immigrants from many countries and cultures.” David S. Gottesman, whose family foundation are key partners in the new building complex, said, “As a dynamic center for intellectual and artistic collaboration and creativity, it is my hope that The National Library of Israel will play an essential role in promoting mutual understanding among all people—within Israel and around the world. It is a transformative project that will preserve the past while imagining the future. “